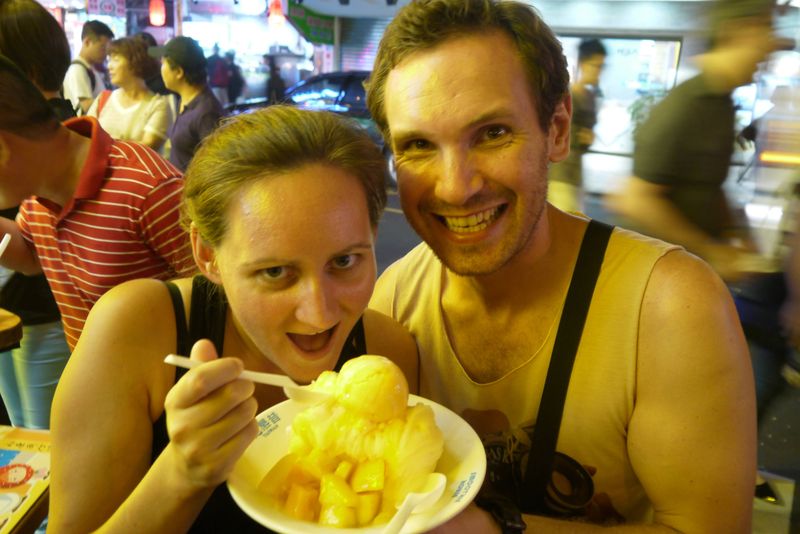 Taiwan was the last country on our initial 15-month adventure; we’d heard many good things about the country so we were anticipating a great finale to the first leg of our travels. During our time in Taiwan we checked out the impressive National Parks and the beautiful scenic areas as well as exploring the night markets and geothermal hot springs. Here are our Taiwan travel costs for three and a half weeks. Our activity costs for Taiwan are some of the lowest of our entire trip, mainly because many of the country’s attractions are free; the National Parks like Yangmingshan and Taroko for example were free to enter and it cost us nothing, or very little, to wander the cities and night markets. There were a few activity costs we incurred though; while in Taipei we visited the Taipei Story House, we warmed up in the Beitou Hot Springs and meandered around the National Palace Museum. While in Tainan, we visited the old Anping Fort, the nature-reclaimed Anping Tree House, the Dutch inspired Chikhan Tower and the unimpressive Eternal Golden Castle. We also had to pay to enter Alishan where we were hoping to see the famous ‘Cloud Sea’, which turned out to be a bit of a wash out for us. The price of hotels in Taiwan was the highest out of all the Asian countries that we’ve visited. In fact, the only reason we kept our accommodation costs down to £14.04 per day was because we stayed with Jackie, our amazing Couchsurfing host in Taipei, for five of the twenty five nights we stayed in the country. If you take away those five days our average daily accommodation costs shoot up to £17.55. Throughout our trip we’ve managed to avoid staying in hostel dorm rooms but when it came to Taiwan, high prices forced us into sleeping in dorms with shared bathrooms for six nights. On the bright side, the hostels we stayed in were some of the best ever in terms of friendly staff, cleanliness and hygiene – our best hostel experience was at Assemble Backpackers in Chiayi City. We managed to afford private hostel rooms for six nights and stayed in a couple of dodgy low-priced hotels for the rest of the time. Overall, we found that accommodation was good quality in Taiwan, as long as you could afford to pay a bit more for it;  the good hostels we stayed in cost about £10 per person per night.

Surprisingly, Taiwan was a fairly expensive country for food, it comes in just below Cambodia and the Philippines, despite the fact that we often ate from supermarkets, night markets, 7-11’s, bakeries and at fast-food places like Subway. A few times we splurged on food in ‘proper’ restaurants like the delicious Imma Bakery in Tainan and Thefreen Burger in Chaiyi but generally we had to work hard to keep our food costs down and our health suffered somewhat because of it. Cost of Travel in Taiwan

Our transport costs for Taiwan are quite high, although this is mainly due to the cost of flying into the country from the Philippines, if you take this off transport costs average out at £6.98 per day. We found transport easy, quick and extremely comfortable compared to the rest of Asia; trains are modern and fast and Taipei has a wonderfully pristine and cheap subway system. We purchased an Easycard which can be topped up to use on buses and the underground system; you can even use the Easycard to pay for things in convenience stores and on buses in other cities too and you get a refund of whatever you don’t use when you want to leave Taiwan. If you want to save more money you can use buses to get from city to city as they’re cheaper than the trains. We found that we didn’t need to rent scooters in Taiwan either, although the cost of public transport to places like Taroko Gorge and Alishan National Scenic Area was quite expensive, local buses in Taipei cost from just £0.14 for a single (five minute) trip. We also took a few boat rides around Sun Moon Lake and a Gondola ride up to the Maokong Teahouses from Taipei.

We had some of the usual miscellaneous costs like toiletries but we managed to save on laundry since our Couchsurfing host Jackie (legend) let us do a couple of loads in his apartment. We also had no need to get a SIM card as we were able to connect to the internet and use Skype all over the place, especially in convenience stores like 7-Eleven, High Life and Family Mart; we were even able to do a Housesitting Skype interview in one! Since it rained a lot in Taiwan we decided to pick up a poncho each as we were caught without a coat and we also got a couple of gifts to take home. This poncho was really useful in Taiwan!

So, there you have it, the cost breakdown of the last country of this trip. More expensive than most Asian countries but cheaper than Malaysia, Thailand and Burma. Here’s the complete breakdown, I think we did pretty well to keep it below £1,000 in total including flights, what do you think? Have you been to Taiwan? How much did you spend?