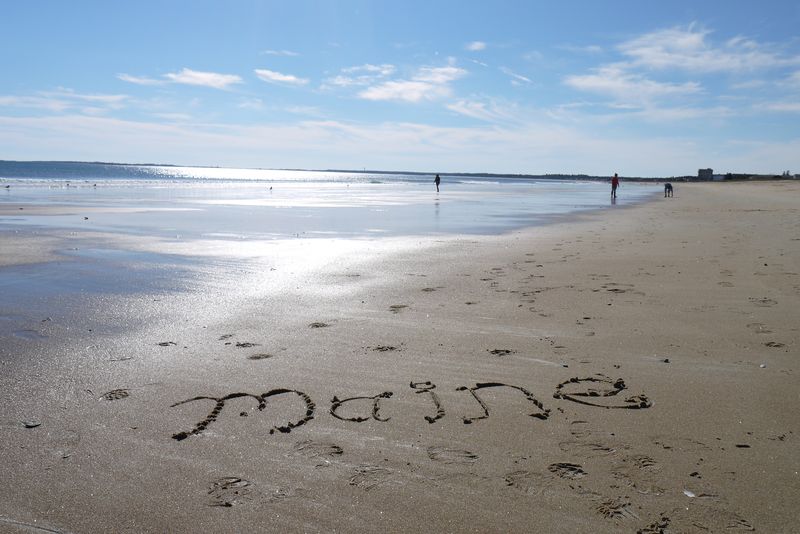 Maine: the Way Life Should be, proclaims the state slogan, which greets us as we drive over the border into this wild, beautiful land. Cars all around us bear the former slogan, Vacationland, on their licence plates and before too long we realise the truth of both these statements. In summer, crowds flock to Maine searching for quaint seaside towns, unspoilt beaches, well-preserved national parks and miles of rugged forest. Although we visited in Autumn, Maine’s beauty still struck us hard – here are the highlights from our time there. Our first few days in Maine were spent in a secluded cabin in the woods; it looked like a cross between a hobbit house and the setting for a horror movie. We were charmed by the rustic cabin, which had been lovingly built by the owner’s grandparents and sported a wood burning stove, an old piano and an overgrown garden filled with fruit trees which merged with the Maine wilderness beyond. A few miles down the road was the port of Belfast. In terms of New England towns, Belfast is a bustling hub, boasting three or four streets lined with popular eateries and a mix of independent shops, including cute bookstores and a shoe shop which declared itself the oldest in the US. I found a robust pair of boots there just in time for a bitter cold snap in the weather, which combined with a broken thermostat, took the shine off our quaint cabin somewhat. The most beautiful part of Belfast was the harbour, which we got great views of along a walking trail. We watched ships docking and loading and from the bridge stretching across the harbour we saw kayakers paddle past and fishing boats bob along while we turned our hoods up and shivered in the cold.

Maine is famous for its craggy coastline and in the summer the population of the state soars with holiday makers searching out beautiful beaches and seaside towns. Camden is one of the most popular tourist destinations, offering a beautiful park, harbour and plenty of seafood restaurants and souvenir shops. On the brutally cold but clear October day we visited, Camden was still busy with people out for Sunday brunch or a stroll around the harbour.

Bangor is the second largest city in Maine and is famous for being the home of Stephen King. We visited the city to indulge my obsession with King’s books by taking the SK tour, which I absolutely loved. As well as visiting many of the settings from King’s stories, we were able to stop outside his house and have our photographs taken by the gate, which is decorated with spider webs, bats and dragons. Some of our happiest times in Maine were spent in Acadia, one of the most beautiful national parks I’ve ever been to. As I recounted in this post about hiking in Acadia, we spent hours trekking through forests and up mountains to catch sweeping views of the island-studded sea and vast, fresh-water lakes. Bar Harbor lies at the heart of Acadia and we spent plenty of time there eating blueberry pancakes, seafood chowder, fresh fish and lobster rolls. Even though much of the town was closed up for the season, we fell in love with Bar Harbor and spent hours wandering its streets, popping in and out of shops, checking out cafes and walking along the harbour. We were incredibly sad to leave this beautiful corner of Maine. After weeks of exploring Maine’s small towns and rocky coastline, I was happy for a change of pace in Portland, one of the state’s most vibrant cities. Portland is renowned for its excellent bars, cafes, restaurants and breweries and we were spoilt for choice food-wise. We spent most of our time in the beautiful Old Port area, exploring its cobbled streets and shops and dog watching along the eastern promenade path. One morning we rose early to catch the Mail Boat, which spends three hours ferrying post to the many islands in Casco Bay, which were previously referred to as the Calender Islands as they appeared to be so vast. At Cliff island we stepped off for a moment to visit the tiny local store for hot chocolate to warm our hands; the woman working there was one of just 60 locals who live on the island all year-round. We visited Portland over Halloween and were treated to zombie dances in the city square, a costume parade, a wicked walking tour and streets filled with elaborate decorations and hordes of trick-or-treaters. We even ended up staying in a huge old house with a spooky history; the owner swore it was haunted and although we don’t believe in ghosts, it was certainly an atmospheric place to stay. As well as city sights, we enjoyed exploring the area around our house, South Portland. This part of the city houses the university campus and is full of students as well as quiet beaches and famous lighthouses which people come from far and wide to photograph, including Maine’s oldest working lighthouse, Portland Head Light. Towards the end of our time in Maine we took a final daytrip to some of the state’s most popular holiday haunts. Orchard Beach, which is full to bursting in summer months, was all shut up for the season and eerily, post-apocalyptically quiet. We had the long, wide stretch of beach to ourselves save for a handful of other walkers and resident seagulls. Further down the coast we came across Kennebunkport, an upmarket vacation spot frequented by the Bush family. While the town was certainly picturesque with its white-steepled church and tree-lined river, we didn’t feel at home amongst the expensive eateries and shops selling Bush-themed souvenirs. The nearby beach made for a great stroll through. Our last stop for the day was Ogunquit, another gorgeous seaside town with an impressive sandy beach spotted with a stream of dog-walkers. All too soon, it was time to leave Vacationland and our wonderful taste of The Way Life Should be.