When we first arrived in New Zealand I wrote that it felt oddly familiar, like the UK with warmer weather and different accents but over the last three weeks as we’ve criss-crossed our way down the North Island this initial impression has faded almost completely. As we’ve hiked up volcanic islands, soaked on hot-water beaches, wandered around steaming orange lakes and explored underground caves lit up with glowworms I’ve begun to feel like I couldn’t be any further away from the UK – in fact, at times I’ve felt like I could  be on an entirely different planet. After our stay in idyllic Raglan we headed a few hours west in search of ancient underground caves and glowworms. Visiting the caves in Waitomo was one of the things I was most looking forward to during our stay in New Zealand – and I wasn’t disappointed. We opted to visit three caves in one day; our trip started with a two hour walking tour of Ruakuri, followed by a visit to Aranui and ending with the highlight – a boat trip through the glowworm cave. The limestone caves were formed over billions of years and as you venture down into their cool darkness your eyes adjust to make out the shapes of stalactites and stalagmites protruding amongst great columns of rusty, brown, red and yellow rock – I felt as if I’d stepped into an alien lair. We wound through tall tunnels, listening to the echoes of our footsteps, the distant rumbling of underground waterfalls and the muted screams of black water rafters. At one point we stood 45 metres underground in the blackness as we encountered our first glowworms, which are actually flies in their larvae stage lighting up to attract insects, which then get stuck in their dangling threads. It was difficult to get good photos of the caves and near impossible to capture on camera the other-wordly feel of the place, but we managed to get a few half-decent shots of some rock formations. When you look closely these begin to take on surreal shapes, the same way staring at the clouds will cause them to rearrange themselves into pictures. On one wall of the cave we saw an Indian Chief’s face hanging neatly next to a bunch of cauliflower in cheese sauce, while in another corner Snow White lined up with her seven dwarfs next to a half-burned candle of waxy white limestone. You could spend hours staring at the shifting pictures in the cave walls. As we boarded the boat in the glowworm caves I wasn’t sure we could be any more awed – but I was wrong. We floated in silence beneath a ceiling of black studded with bluish-white pinpricks. To begin with the experience was reminiscent of that first perfect night sky I saw kayaking in the Bay of Islands. Gazing up at the glowworms became stranger though; my eyes began to play tricks on me and I felt the blackness was a hole to another universe, as if the glowworms were suspended just above me and I could fall into the dark canopy beyond if I looked hard enough. Unfortunately cameras aren’t allowed in the glowworm cave so you’ll have to use your imagination to picture them or go and see for yourself. After our trip to the caves we set off for Rotorua, one of the most thermally active areas in New Zealand. No sooner had we arrived than our hostel owner was telling us stories of people who’d been boiled alive by the 100 degree water in the nearby lake. We were also instantly assaulted by the stench of rotten eggs and badly burned popcorn; sometimes you almost got used to the smell until a gust of wind carried a particularly viscous wave of it straight up your nostrils. In the end we decided to embrace the stench and head straight for the stinking geysers and sulphur lakes at Wai-O-Tapu, the Thermal Wonderland. We arrived in time to watch the Lady Knox Geyser erupt, as it does every day at 10.15am. Just as I was wondering how the geyser knew to erupt exactly every 24 hours a ranger solved the mystery by dumping a load of “washing powder” into the hole, causing the tension between the scolding liquid beneath the cooler surface water to mingle and explode out the top – here’s the result:

The day got weirder as we wandered around the park, encountering steaming lakes bubbling with orange and green-tinged sulphur and chemicals. These pools were surrounded by deep craters which were all named, obviously, after the devil: we saw the ‘Devil’s Hole’, the ‘Devil’s Inkpots’ and even his bath. To me, rather than hell, the place looked prehistoric, like scenery from the film 10,000 Years BC; you could just imagine dinosaurs lumbering out of the forest and wading around in the lakes. 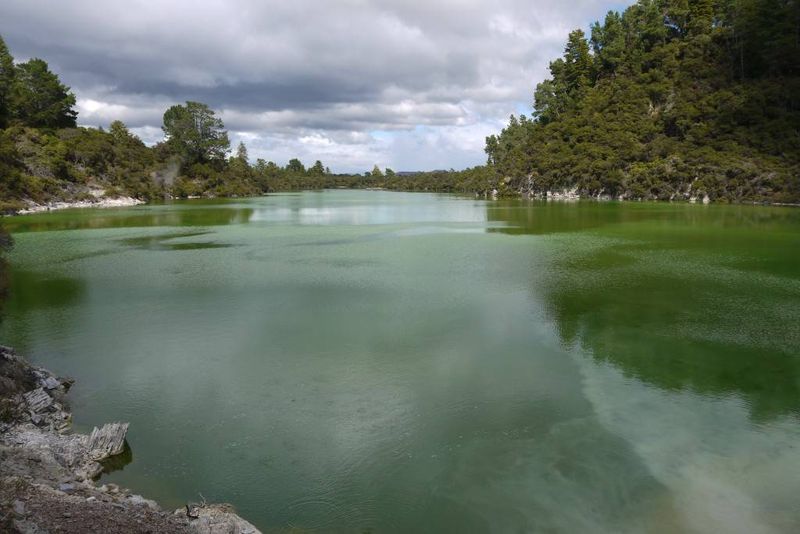 To top off our stay in Rotorua we spent an evening at the Polynesian spa, where we finally relaxed in baths heated by the thermal springs. We even started to forget that everything stunk of rotten eggs – well, almost.