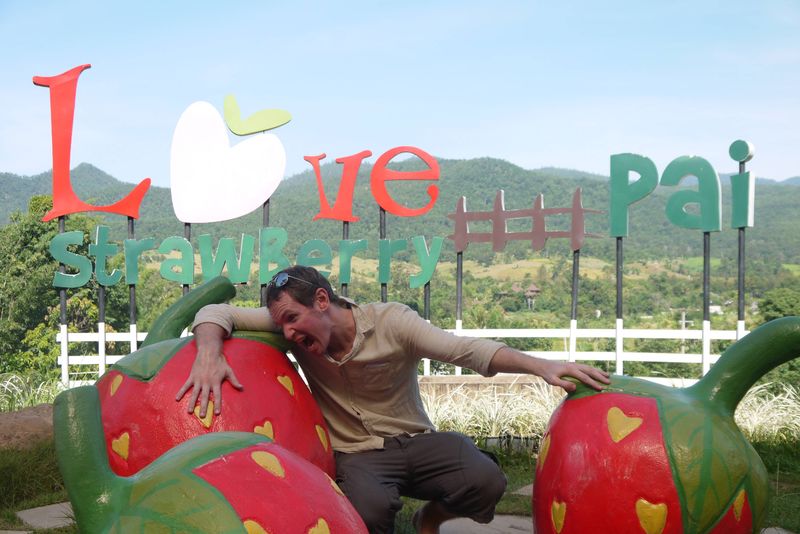 While we relished the chance to stop moving for a month and settle down in our Chiang Mai apartment, a couple of weeks into our stay we were starting to get itchy feet again. So, we decided it was time to get back on the road and take an overnight trip to a much-hyped destination: the hippy mountain town of Pai to eat, relax and explore the northern Thai scenery. Journey into the Mountains

We’d heard a lot about the windy, vomit-inducing road from Chiang Mai to Pai and prepared ourselves to be nauseated as we climbed aboard the crowded mini-bus for the three-hour journey. Surprisingly, no-one on the bus had to use the free sick bags and we drove in peace, eyes glued to the windows as we left the smoke-choked streets of Chiang Mai and headed out onto narrower, less congested roads. We watched the landscape turn ever greener as we began ascending the spiralling paths, misty-topped mountains unfolding out into the distance. Eventually we pulled into the tiny bus station in Pai and set off down the main street. Although we weren’t visiting in high season there was still a very definite tourist presence in the town; everywhere you looked travellers strolled around or lounged in cafes, many sporting dreadlocks, wearing hippy trousers (me included!) or holding a bottle of Chang beer. After finding an incredibly cheap room for just 200B (£4), we grabbed a sandwich and delicious smoothie at one of the many cute cafés and tried to figure out just how we were going to explore the surrounding sites. Although we avoid renting scooters in Asia, after asking around and finding out how expensive tours and private cars were, we found that renting a bike was the only reasonable way to get around Pai. It appears that pretty much everyone who visits Pai comes to the same conclusion because there were plenty of motorbikes to choose from; after nervously pulling on our helmets I climbed on behind Andrew and we began, very slowly and carefully, to head out and explore. Almost immediately we were on the road out of town, cutting through the cool air alongside fields set against a backdrop of mountains. Although I love cities, I found myself glad to be out of Chiang Mai breathing the clean air and watching the countryside roll past in a blur of yellows and greens. It wasn’t long before we made our first stop at a place I’d read all about – Coffee in Love, a tiny café perched on the hillside. It wasn’t difficult to see why it was such a popular venue once you pulled over and took in the incredible view beyond, which looked almost like a fake cardboard cut-out it was so perfect. Our next stop was another well-placed eatery; Love Strawberry Pai. This time we had fun posing amongst all the cheesy statues and strolling among the love trees before heading on to the memorial bridge, built during world war II as part of the infamous Death Railway. We made a short stop at Pai Canyon, a waterfall and a hillside temple before heading back to town for an evening of indulgence. That night we treated ourselves to an incredible meal at the famous Witching Well which included some tasty apple pie and carrot cake before settling in for what was for me, a relaxing oil massage – Andrew unfortunately had a more painful Thai massage that left him with more aches than he started off with. Despite that, a slice of Pai was just what we needed to refresh ourselves before heading back to Chiang Mai.